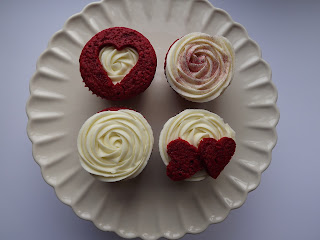 I know I posted a few Valentine's recipes a few weeks ago, but there was one more I wanted to try. These Red Velvet Cupcakes were inspired by the success of my Blue Velvet version a few weeks back, and by a decorating idea for 'sweetheart' cutouts I found on the wonderful blog by Audra, the Baker Chick.

I used the recipe from the Blue Velvet version, although obviously changed the food colouring used.  I first tried Wilton's Red Red (1 1/2 tspns) but this seemed a bit orangy, so I added some Sugarflair Poppy Red (1 tspn) and a small dab of Wilton Violet to deepen the colour. I think it worked really well.This means that my US Cake Flour  also made another appearance. I can't tell you how pleased I am at how they have turned out. They are incredibly tender and the cream cheese frosting is fast becoming my favourite of the moment. 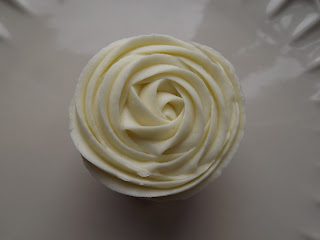 Using a Wilton 1M icing tip, I couldn't believe how easy it was to create this lovely rose swirl effect (piping is a fairly new area to me). I then left some plain, and decorated the others three different ways.

The simplest was just adding some sparkle by way of edible glitter. 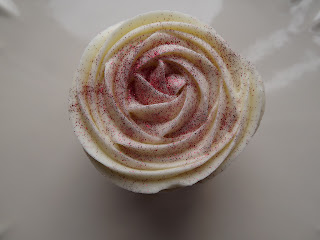 Then I tried slicing off the top of the cupcake and using a heart cutter to make a cutout, then piping a rose swirl and reaffiixing the top so that the rose effect peeks through: 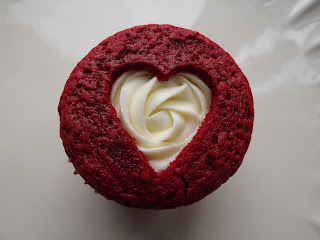 For the final one, I then took some of the heart cutouts and used them as toppers: 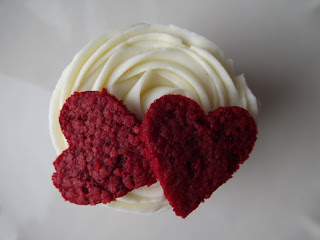 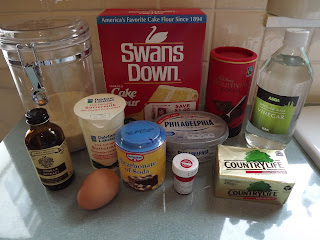 Preheat the oven to 155 fan / 175 conventional. Prepare a muffin tin with cupcake liners.

Cream the butter and sugar until light and fluffy. Add the egg and mix. 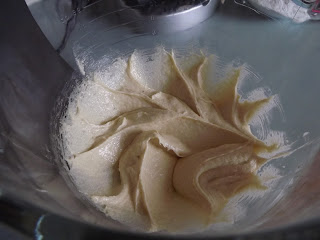 Mix the cocoa and food colourings to form a paste and add this to the bowl. 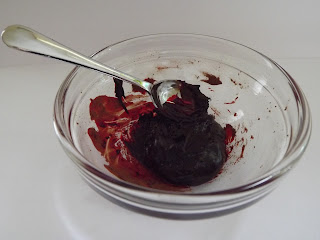 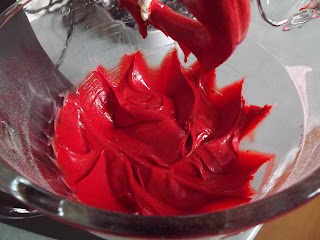 Sift the flour and salt together, and add this to the mix in thirds, alternating with the buttermilk. Add the vanilla.

In a small bowl, mix the bicarbonate of soda with the vinegar and then add that to the mixture.

Scoop into the prepared pan, so that each cupcake case is no more than two thirds full. 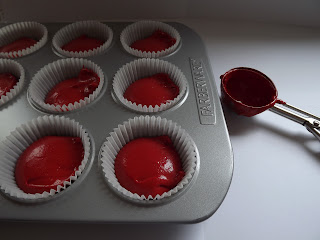 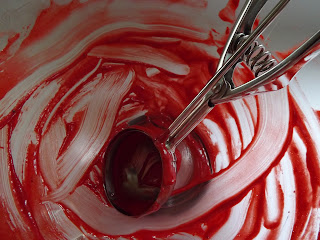 Bake for 25 - 30 minutes until a cocktail stick comes out clean. Remove from the oven and allow to cool. 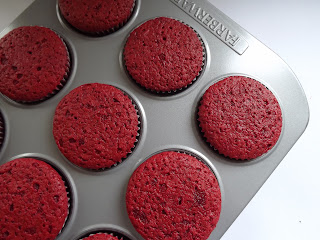 Make the frosting by beating the butter and cream cheese together, then add the vanilla and icing sugar. Beat well until smooth and creamy.

To make the cut out hearts, slice off the top of a cupcake, using a serrated knife and the top of the cupcake case as a guide. Place the top, top side down on a cutting board, and using a heart shaped cutter, stamp out the middle. 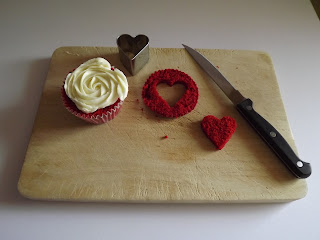 Pipe a swirl of frosting (or spread on the cupcake), then replace the top. 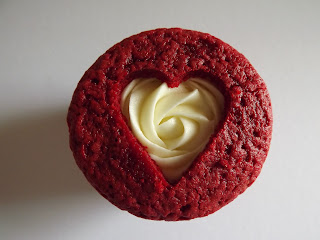 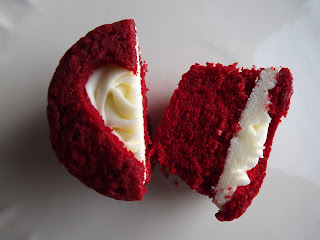 You can of course decorate any way you like: 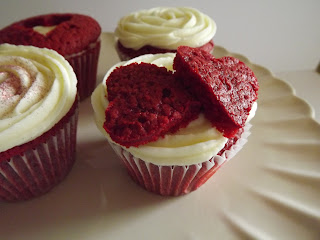 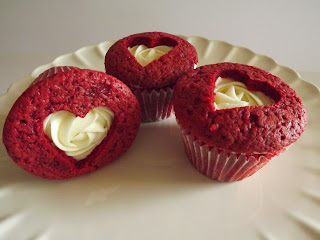 As I said, I'm really pleased with them. At least they will make for a less dramatic Valentine's for Mike than last year, when I gave him the news that our third son was on the way.