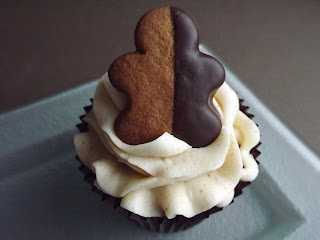 So, in other news today, Susie has published yet another gingerbread post ...

Yes, gingerbread, again. I know. I'm sorry. But it is that time of year. And besides, I think I told you that I love the stuff ...

Anyway, you may recall my recent Snowy Gingerbread Cottage post, in which I told you all about the humongous amount of gingerbread dough I made from a BBC Good Food recipe? I said that I had made an army of gingerbread men, and this is where they turned up. As incredibly cute (even if I say so myself) cupcake toppers dipped in dark chocolate! 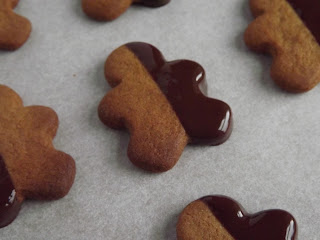 Sadly, I can't take the credit for this fab idea, as I first noticed it on a Sweetapolita post last year. But it stuck in my head and I thought that when I had an opportune time, I would give it a go. And Oh My, they are delicious! Even on their own. 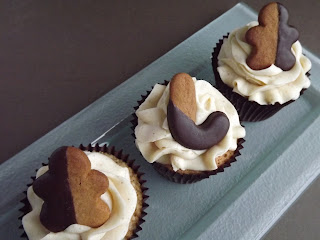 But on top of Gingerbread Cupcakes with Ginger Buttercream? Now you're talking my kind of winter warmer. 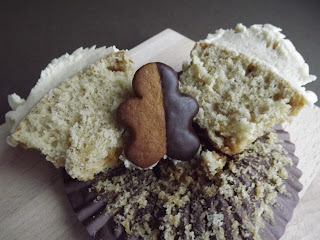 The cupcakes are easy to make, and I have adapted the recipe slightly from one I found in Christmas Heaven (one of the regular Food Heaven series of baking magazines) by Tamara Jane. The recipe can also be found in her book, Celebration Cupcakes.

Sift the flour, bicarbonate of soda, spices and salt into a bowl and set aside.

Place the butter and caster sugar in the bowl of a stand mixer, and blend using the paddle attachment until light and fluffy (this should take a good 5 minutes with the mixer on medium-high).

Add the eggs one by one and mix until smooth.

Fold in the crystallised ginger so that it is evenly distributed. 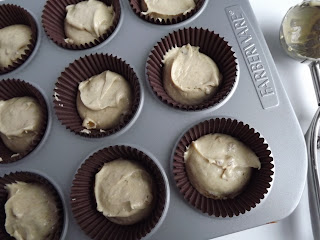 Scoop the mixture into the cupcake liners so that they are about half full.

Bake in the centre of the oven for about 20 - 22 minutes, until risen and a skewer inserted into the middle comes out clean. Remove from the oven and allow to cool for a few minutes, before turning out onto a wire rack to cool completely. 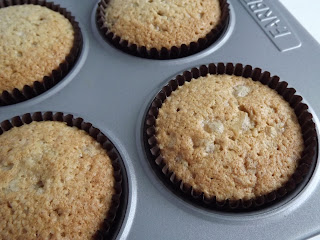 To make the buttercream, place the butter in the mixer with the paddle attachment and blend so that it's smooth. Add the other ingredients, and then with the mixer on low to start, then moving to medium-high, mix until well blended. Keep the mixer going for a few more minutes so that the buttercream is light and fluffy. If you need to (if the mixture is a bit stiff) you could add a little more milk - maybe 1 tspn. Use to  pipe or smooth onto the cupcakes (I used it to pipe swirls using a Wilton 2D piping tip). 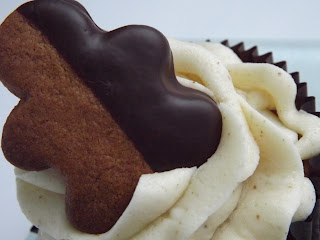 To make the cupcake toppers, I just used some gingerbread dough rolled thinly and cut out small cookies using the smallest gingerbread man I had. They only took a few minutes to bake until they were crisp and golden. Once they had cooled completely, I melted about 75g of plain, dark chocolate (70%), and then dipped the cookies, leaving them on a piece of baking parchment to harden. I also made some candy canes as well - you could do anything! The only thing to bear in mind is that the buttercream can make the cookies soften after a little while - so add the toppers just before serving so they stay crunchy. 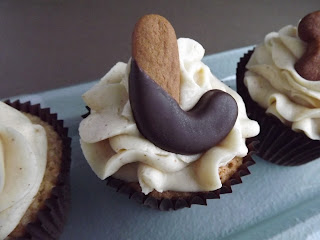 The cupcakes are really lovely and moist, and they are not too gingery. There is a lovely warming background note, and then you get a little piece of crystallised ginger which intensifies the flavour momentarily. The buttercream is not too sweet, either - just right with the cupcakes - and the dark chocolate on the toppers gives an exotic hint of bitterness.