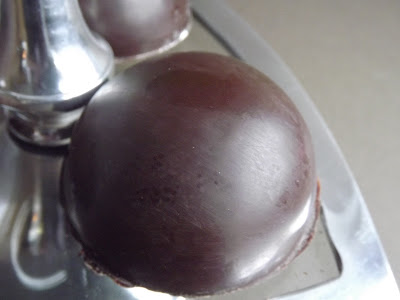 There's a reason these little cakes / biscuits / whatevs were chosen as one of the technical challenges on last year's series three of Great British Bake Off.

While they are delicious, and probably make up at least one childhood memory of most adults in Britain (Tunnocks Teacakes anyone?), they are one of the most fiddly things I have ever made in my life. What with tempering chocolate, making the biscuits, and then faffing with marshmallow. And doing them against the clock?

I should have known from watching the programme. Especially with poor Kathryn's encounter with chocolate that failed to harden. But, and this might seem a tad egotistical, watching Paul Hollywood's later teacake 'Masterclass' (you can find the recipe on line here), as he made it all seem so simple, I started to think 'what's so hard about that?'. 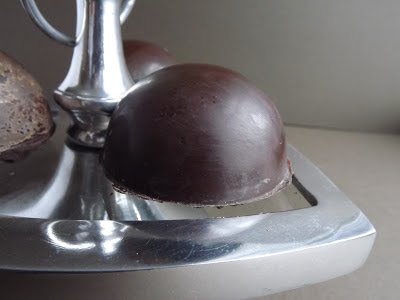 So, here you go. My attempt at Teacakes.

But, these are teacakes with a difference.

Apart from the crazy paving effect of poorly tempered chocolate - which matched my own poor temper at the end of the whole process - I decided to jazz them up a little.

So there is a little powdered coconut in the biscuit base.

And there is a cheeky dosing of Malibu in the marshmallow.

So gorgeous is it, I could have eaten the marshmallow on its own. And I did. But then had to stop myself.

The teacakes themselves taste delish. The biscuit base is more like a soft shortbread. It goes well with the gooey marshmallow. Encased in chocolate, it definitely is a tea time treat, The addition of the coconut worked really well (although coconut and chocolate together always works well in my book). 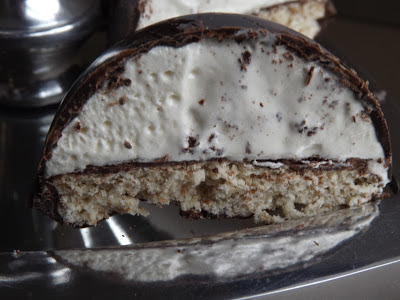 However, as lovely as they are, they are very, very sweet. So to enjoy them without overdoing it, I'd reckon on stopping at half a teacake. You can always take a breather and save the other half for later.

Once I had braved cutting into one, I realised that my marshmallow was a little runnier than is ideal (although in the pictures above - which I took the following morning - it seems to have set up a bit overnight). I guess I needed to whisk for a bit longer than I thought was necessary.

Ingredients (makes 6 easily - you could try for 8)

You'll need a silicone half sphere mould - each sphere being 7.5cm in diameter. I got mine on line from Sew White.

First, melt the chocolate in a bowl over a saucepan of simmering water (be careful the bottom of the bowl doesn't touch the surface of the water otherwise the chocolate will burn). I used about 300g of dark chocolate (that's all that I had) and it was still plenty to make the teacakes. In fact, I still had some left over at the end.

Leave to cool and thicken slightly. Then, pour a teaspoon of chocolate into each of the half-sphere moulds. Work the chocolate around the inside of the mould so that you have coated - as evenly as you can - all the way around. Try not to make it too thick, as you'll need to break through this later when you want to eat it! I found that having the pink version of the mould helped me see where the chocolate might be too thin - as I could see pink areas through the chocolate. 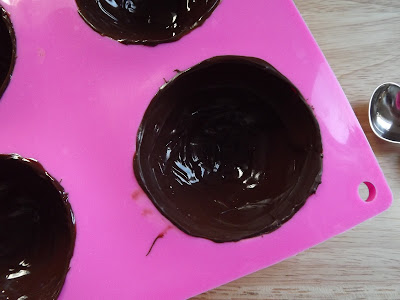 Next, preheat the oven to 140 Fan / 160 Conventional / 325 F / Gas 3.
Make the biscuits. Place the flours, sugar, salt and powdered coconut into a bowl. Rub in the butter until you have a mix that looks like coarse breadcrumbs. Add the milk, a little at a time, until the dough comes together. As noted, I needed a little more milk than stated in the original recipe - about another tablespoon at least. Roll out the dough. The original recipe says to roll out the dough to a depth of 5mm - I found this a little thick, and would roll it out a little bit thinner next time. Use a 7.5cm cutter to cut out six rounds. Place them on a greased baking sheet, or one lined with grease proof paper. Prick them with a fork. 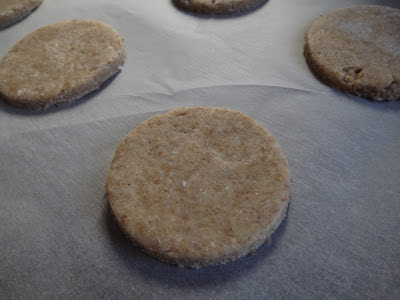 Chill in the fridge for 10 minutes. Then bake in the oven for 10-12 minutes until just starting to tinge around the edges (they will still be quite pale). Remove, and allow to cool for a few minutes - if necessary at this point (and while they are still a little soft) use your cutter to trim them to size again if they have spread - before transferring to a wire rack to cool completely. 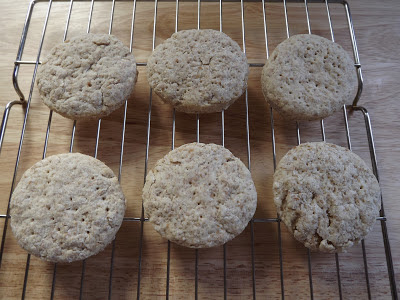 Once they are cool, dip them in the remaining melted chocolate to cover. You need a good, even coating but not too thick. Place on a baking sheet lined with baking paper and leave to harden. 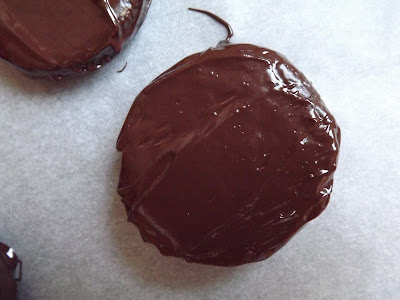 To make the marshmallow, place all the ingredients in a heatproof bowl and place over a saucepan of simmering water. Again, make sure the base of the bowl doesn't touch the surface of the water. Use an electric hand mixer on full to whisk the mixture until the sugar has dissolved, and the volume has doubled to a stiff, thick, billowy meringue. This will take a while - 6 to 8 minutes according to the recipe. You need the mixture to be thick as it is going to be piped into the chocolate shells. Once it has reached this stage, take the bowl off the heat and allow it to cool completely. 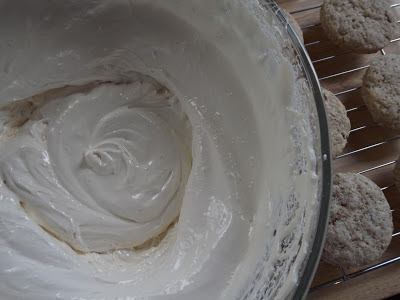 Spoon into a piping bag fitted with a 1cm nozzle. Pipe into the chocolate shells so that there is a 1cm gap to the top of the mould (you need to sit the biscuit in this so that it fits nicely). It's from this point on that I had a bit of trouble, so if you are a perfectionist with your presentation, go slowly, and take care. If you overfill the marshmallow, it will squidge over the edge when you press the biscuit down onto it. 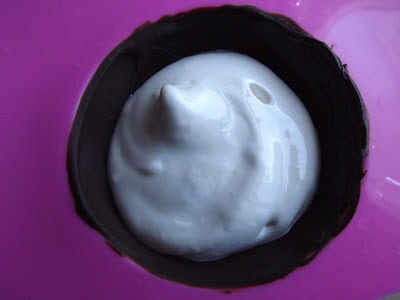 Even leaving the gap with the marshmallow I did, I still had a little overflow, once the biscuits were in place. The biscuits also sat higher than the top of the mould. You can see that here. 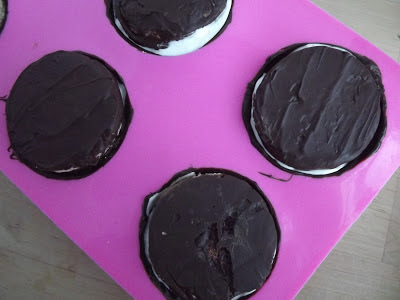 Place the remaining melted chocolate into a piping bag. Pipe around the top of the spheres, and then place one of the biscuits on top. Pipe around the edge again, and use a knife to smooth the chocolate around so that you have a nice edge (if you can - mine was a bit messy). 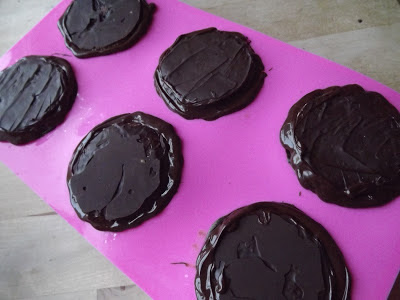 Leave to harden completely before turning out. The way to do this is to invert the mould using a chopping board, and then, with the mould upwards, peel it away from the teacakes. I found that you can pull on the mould out to the sides slightly, so that it loosens it, and then peel up so that the very top of the teacakes is the last to come out. I realised at this point that some of mine had a light discolouration in the chocolate - I need to practise my tempering! 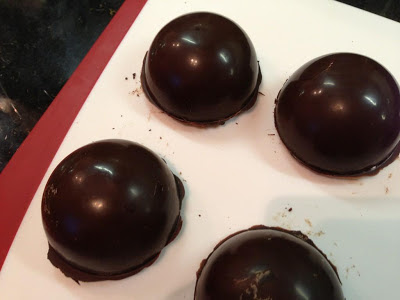 If necessary, tidy up the edges a little, by trimming carefully with a knife.

Out of the six I made, three came out of the moulds looking reasonably respectable. The other three were a little mottled in colour - I guess because the chocolate wasn't tempered properly, or because of the quality (Asda own brand, I suspect, does not a fancy pátissiere make). Needing to take some decent photos but running out of light, I decided to cover them with cling film and leave them overnight. This - accompanied by various teenage prodding fingers - didn't help the situation. The next morning they had all lost their glossy shine and the mottling had got worse. 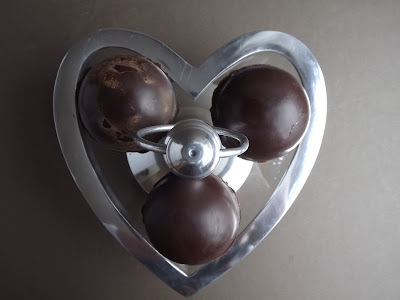 Fortunately, this is one of those situations where the looks don't affect the taste. They tasted just as good.

So, if you are tempted to give them a go, it's worth it. At least just the once. For the experience.

Otherwise, if you can get someone else to make them for you then do.

All the pleasure without the pain.