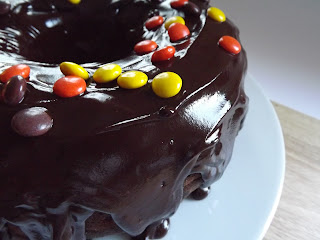 It's clearly turning into American month on Fold in the Flour, as this particular Bundt cake is again inspired by the US. I've recently blogged Chocolate Peanut Butter Cupcakes for the Cupcake Book Club. They went down so well, I wanted to try another chocolate and peanut butter recipe. Flicking through some of my baking books, I came across this one, from a little book called 'Cake Keeper Cakes', by Lauren Chattman. The idea being that the cakes in the book can be kept on your counter top for a few days, in one of those glorious covered cake plates (sadly I don't have one of those, so tupperware for me!). However, I love the idea of the genteel hospitality this evokes, with friends and family dropping around for a cup of tea, slice of cake and a chat. 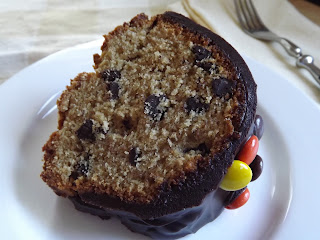 As a side issue, in case you're not aware of this, Cardiff has a fantastic shopping centre, particularly if you're a cookery enthusiast. Whether you love cookware gadgetry, ingredients or farmers' markets, there is plenty to interest you and your pennies. One day, I'll do a post on a baker's guide to Cardiff. For now, and where this particular cake comes in, I just thought I'd mention that there is also an American candy retailer that has now opened up. Although it's a bit pricey, I had a nosey in there the other day. I came out quite a few pounds lighter, but with some goodies that I've heard about but never tried. York Peppermint Patties. Mint M&Ms. Peanut Butter M&Ms. And Reeses Pieces. When I found this particular recipe, it called for chopped Butterfinger bars as the garnish on top (they look a bit like Crunchies but made of peanut butter). I didn't have any, so decided to use the Reeses Pieces. This gave the cake a bit of a childs party look, rather than the more elegant one in the book. But it still tasted great. 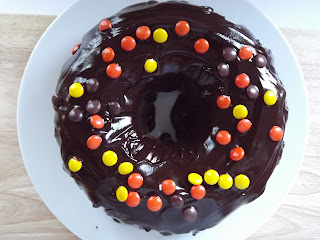 Aanyways, the recipe also didn't originally have chocolate chips in it, but when I had mixed the batter, it was quite thick and I thought it could take them. They added even more of a chocolatey feel to the cake, which I preferred to just the peanut butter mix on its own. The cake is quite dense once baked (maybe tending towards a little dry), but still delicious, as the sour cream stops the peanut butter from being too cloying. The chocolate glaze I found to be perfect with it, although Mike (who is not a fan of dark chocolate) preferred the cake without it. The recipe makes a big cake - definitely one to last a few days.

Whisk together the sour cream, eggs and vanilla in a jug. Mix the flour, baking powder, soda and salt in a bowl. Combine the butter, peanut butter and brown sugar in a stand mixer and cream until fluffy. With the mixer on low, add 1/3 of the flour mix and beat until incorporated. Add 1/2 the liquids and mix well, then continue with 1/3 flour, the other 1/2 liquid, and the final 1/3 flour. Scrape down the bowl if necessary to ensure all the ingredients are mixed in. Turn the mixer to medium-high and beat for 1 minute. 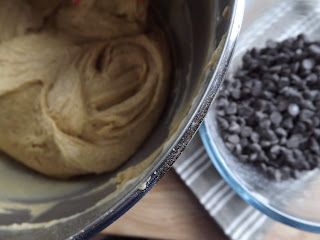 Toss the chocolate chips with a little extra flour, then gently fold them into the mix until they are evenly spread throughout. Turn into the prepared bundt pan. 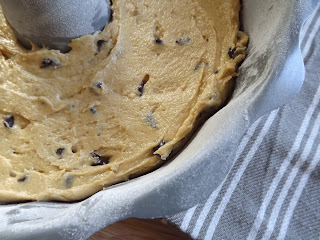 Bake for about 40 - 45 minutes in the centre of the oven, until a skewer comes out clean. Cool in the pan for 5 minutes and then turn out onto a wire rack to cool completely. 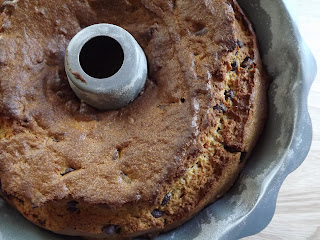 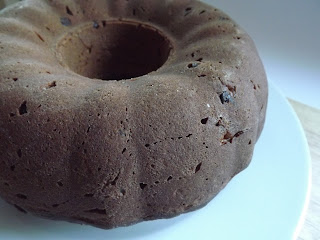 To make the glaze, put the chocolate into a bowl with the cream and butter, and melt over a saucepan of boiling water (make sure the water doesn't touch the bottom of the bowl, otherwise the chocolate will burn). Stir until smooth, remove from heat and leave to cool slightly. Pour the warm glaze over the cake, and let in drip down the sides. Sprinkle your decoration over the top, and leave to set for about 30 minutes. 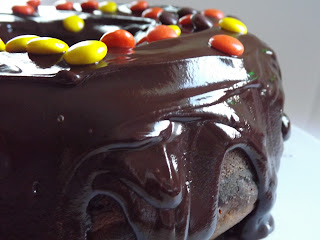 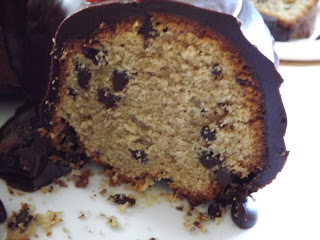 The cake can be stored in an airtight container for up to 3 days (that's if you need it to).