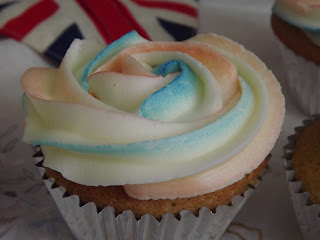 With the Queen's Diamond Jubilee fast approaching, I've wanted to try out some ideas for Jubilee-themed baking, and so these Jubilee Rose Berry Cupcakes are the first. They are a vanilla cupcake, full of juicy raspberries and blueberries to give some red, white and blue. There's no rose flavouring involved and the 'rose' comes from the coloured cream cheese buttercream piped in the shape of a rose. I think these are lovely and summery and would be perfect for a Jubilee themed party! 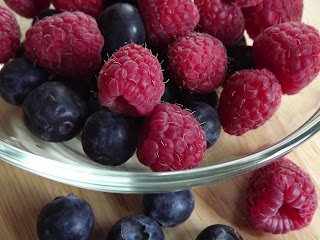 The cupcake recipe is simple, and makes about 12 cupcakes. The striped effect in the buttercream is made by using a cocktail stick to paint the inside of your piping nozzle with stripes of colouring (I used Wilton's gel paste in Royal Blue and Red Red). I found that the colour on the first piped cupcake was a little strong, but after that you had a lovely subtle effect - although I did need to use two piping bags for the whole lot, as the colour faded to white totally half way through. 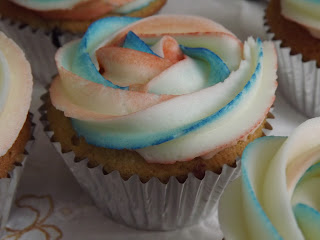 In a stand mixer with the paddle attachment, cream the butter and sugar together until pale and fluffy. Add the eggs one by one mixing between each to incorporate. Add the milk and vanilla, and then beating slowly, add the flour and mix until smooth. Dust the berries with a little flour so they are coated (this helps to stop them sinking to the bottom of the cakes). Gently fold them into the batter. 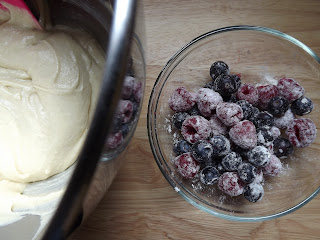 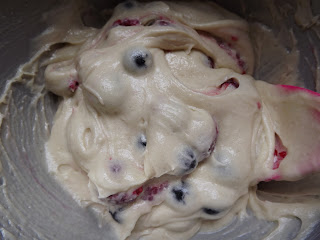 Scoop the batter into the cases so that they are no more than two thirds full. 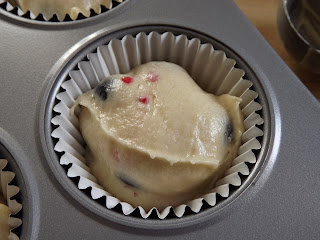 Place in the centre of the oven and bake until a skewer comes out clean - mine took about 18 minutes . 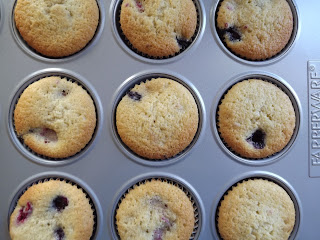 For the buttercream, using a stand mixer with the paddle attachment, I blended the softened butter and the cream cheese until they were smooth, I then added in the icing sugar bit by bit to get the consistency I wanted. (I added the cream cheese as I like the tang it gives to the buttercream so it's not overly sweet, and I thought it went perfectly with the berries). I then used a piping bag with a Wilton 1M tip, using the coloured gels as previosuly described to pipe the rose effect (holding the perfectly straight and moving the nozzle from the inside out). 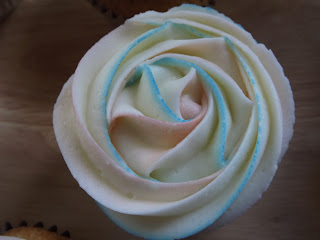 The berries end up dotted through the cake, and make the sponge really moist and fresh-tasting. The buttercream was just right as a topping. 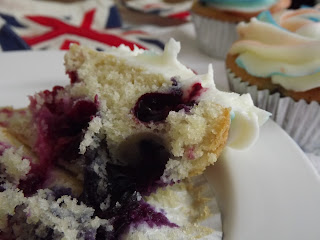 I've seen some other fantastic Jubilee posts recently (check out these cute cupcakes by Ros on the More Than Occasional Baker or these amazing shortbreads by Aga Girls), and as Fluer from Homemade by Fleur is running a Jubilee Baking Competition, sponsored by Appliances Online, I thought I'd enter these.

The closing date as you can see is 3 June, so why don't you check out Fleur's blog after that for the entries and winner - who'll get a £100 Amazon voucher courtesy of Appliances Online. 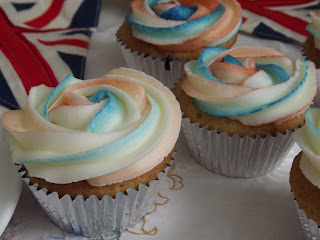 So, Happy Jubilee Baking - what will you be making?