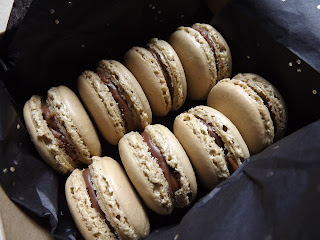 For the first time in quite a while last week, I had a quiet day all to myself. Sam was at nursery on a long day for the first time, and with no one else around I had the luxury of being able to spend hours in the kitchen on a baking session. I really wanted to give macarons a second attempt, after the success of the Pistachio and Dark Chocolate ones the other week. Don't get me wrong, my first time macs were in no way perfect, but I was still pretty pleased with them. I must admit, though, I was pretty nervous. What if the second time turned out to be a disaster? What if I couldn't recreate the magical alchemy? 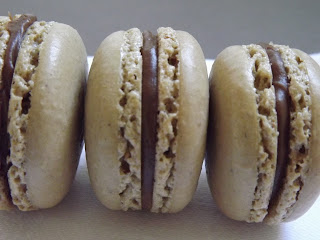 Well. As you can see, these didn't turn out too badly. Although there were some differences. I used toasted hazelnuts to replace the pistachios in the pistachio-almond mix. I thought that using toasted hazelnuts would give a more intense hazelnut flavour, and it did work well. In trying to find something that would pair with the hazelnut, I was inspired by the hazelnut syrup used in latte coffee, so working in reverse, decided to try a coffee flavoured ganache as the filling. 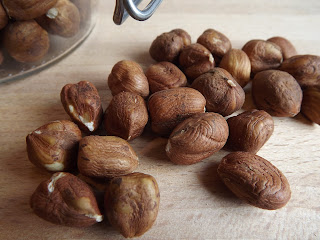 Although I did have some whole hazelnuts, on this occasion I used ready chopped, toasted hazelnuts, which I blitzed in my food processor, with a little of the icing sugar, before adding in the ground almonds and processing for a little longer. The hazelnuts didn't seem to grind as well as the pistachios (perhaps as being toasted they were harder?), and I thought that the macs, after cooking, looked just a little rougher.

I again used both the Lakeland and Squires Kitchen macaron mats (detailed in my previous post on Pistachio Macarons). The Lakeland mat produced deeper macs that were slightly more chewy than the Squires ones, which were flatter and therefore slightly dryer.  Only slightly though.


The key thing I noticed was that in comparison to last time, I might have overwhipped the egg whites slightly, as they were firmer, and therefore the almond mix needed more folding to get it anywhere near the consistency to fall 'ribbon-like' from a spatula. This in turn showed itself in the piping, but combined with using a smaller piping tip, also meant that I had more control over the piping. 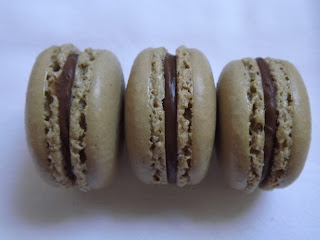 For the ganache, I used some Chocolate Cappuccino Drops that I sourced online from Melbury and Appleton, a deli offering mail order. I used 125g of chocolate drops to 55g double cream, melting in a bain marie, and stirring until smooth. The chocolate drops may have been a bit of a cheat, but they had a lovely, mellow coffee flavour. When combined with the cream, it tasted just like a cappucino. 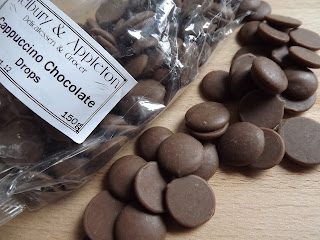 The resulting macaron tasted very much like nutella, with a hint of coffee. I thought they were delicious, and was really pleased with the flavour.The texture of the macs was again of crunchy shell with a chewy inside. Highly addictive.

Prepare your baking trays using either silicone mats, or by using baking parchment. If using the parchment you can make a template using a 3cm cookie cutter - trace around the cookie cutter with a pencil to mark individual circles evenly spaced apart at least 3cm. Turn the paper over, so that the circles show through, before using.

Grind the hazelnuts with half of the icing sugar until they are finely ground (try not to overgrind or they may become oily). Add in the almonds and the remainder of the icing sugar and process again. Sift the mixture twice to remove the largest of the grains.
In a very clean bowl, beat the egg whites until they reach the soft peak stage. Continue whisking while adding the caster sugar a little at a time until the mix is smooth and glossy. (At this point I added a little dark brown gel food colouring and whisked again to incorporate it - I think it's here I may have overwhisked the mix slightly, as the colouring wasn't giving the shade I wanted so I had to keep adding more!)

Add half the nut mixture and mix until smooth. Fold in the remaining nut mixture until the mix is glossy and falls in a ribbon from your spatula. 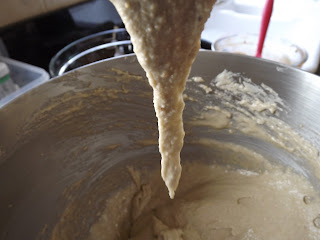 Transfer the mix into a piping bag fitted with a 1cm round nozzle. Pipe your macs with the bag at a 90 degree angle to the baking parchment. Stop just before you reach the edge of the circle, to allow for a little spreading. (I added a little gold lustre dust to the top of some of mine at this point - just sprinkling it by tapping a loaded paint brush against my finger).

Tap the tray on the top of the counter so that any air bubbles in the mix are dispelled (if you see any in the top of the macs, you can pierce them with a toothpick). Leave the macs to stand for at least 30 minutes (I left mine for 45); you want the macs to be no longer sticky to the touch.

Bake in the oven for approx 15 minutes. Remove, and immediately (and carefully) slide the mat onto a wire rack and allow to cool completely. Once the macs are cool, carefully remove them. I found it easiest to peel the mat from the macaron, rather than the other way round, as that seems to stop the macs from disintegrating.

Organise the macs into same size pairs. Pipe some ganache onto one half, pair with the other and sandwich together. 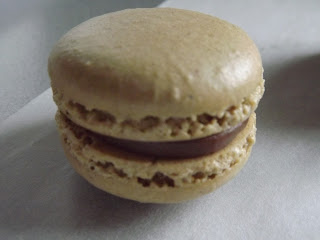 Well, they were definitely not a disaster, as they tasted great, although they didn't seem to look quite as polished as my first attempt. I suspect that is again the coarser nut mix combined with thicker egg white. 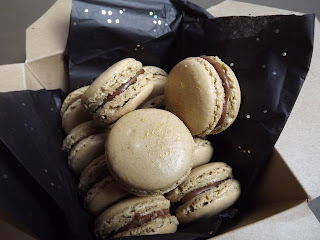 Anyway, I certainly enjoyed them, and as the only person in the house to like meringue, I luckily had a lot to enjoy. Definitely not a disaster...