One a Penny, Two a Penny ... Hot Cross Buns for the Weekly Bake Off 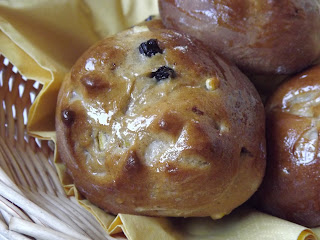 There are times when I wish I had taken more notice of the stories and reminiscences my nan and mum used to tell me. My grandparents died quite a long time ago, and my mum has sadly given up her memory to the ravages of Alzheimers. The treasure trove of family history has, for the most part, gone with it. I wish that I had these strories written down, as my own memory of them is starting to fade, too. There are some that are still with me though, and one is the story my nan used to tell me of selling Hot Cross Buns at Easter, in pre-World War I Cardiff. 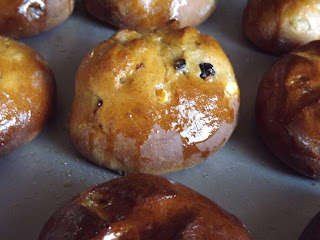 My nan's family were originally a farming family from Hereford, but at some point they lost the family farm, eventually moving to Cardiff around 1900, when my nan was two. They began a dairy business, delivering milk and other goods from the back of a horse drawn cart. As she grew slightly older, my nan would often accompany her father, sitting up front with him while he made the deliveries. At Easter time, they would also deliver Hot Cross Buns along with the milk. In the early morning, the cart would travel the streets of Cardiff, with my great grandfather calling out to attract customers 'One a penny, two a penny, Hot Cross Buns'. I can't see a Hot Cross Bun without thinking of that. 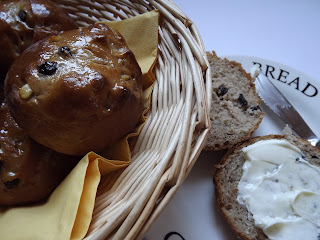 With Easter drawing near, Amy's choice for this week's Bake Off was Hot Cross Buns (from Mary Berry's 100 Cakes and Bakes). This is, again, something that I have never made before, so was pleased to give them a go. It took me two attempts though, as a disaster with the first batch meant that I had to bin them (I added way too much liquid to the dough and was left with a sticky mess resembling wall paper glue - must remember to read the recipe properly and preferably with my glasses on!). The second batch was much more successful. 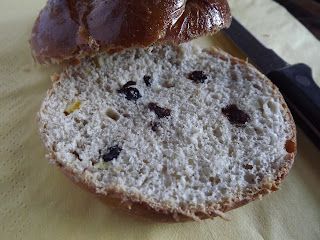 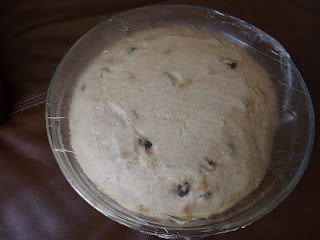 The dough is then kneaded briefly again, before forming into 12  round buns, and leaving to rest again. MB's recipe suggests slashing the top of the buns with a 'X' before leaving to rest, or alternatively, using a shortcrust pastry to made the traditional white cross. I was running out of time, so took the easy route and did the simple cut cross, but clearly did not do this deeply enough, as once baked you could hardly tell there was a cross there. 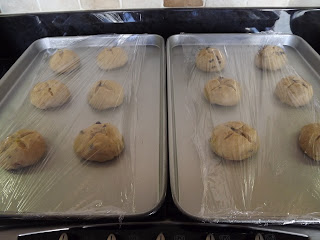 Once baked, you brush a simple sugar syrup over the top to give a lovely, sticky shiny glaze. 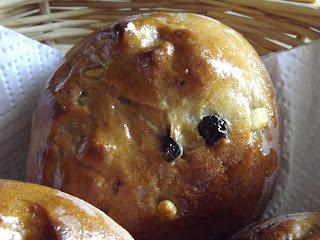 MB's recipe calls for an oven preheated to 220 conventional / 200 fan, and then baking the buns for 15 minutes. I found that the buns turned dark brown quite quickly at this temperature (I use a fan oven and so dropped the temp to 160 after 8 minutes), and so if I made them again, would drop the temperature slightly to maybe 180 - 190 fan. 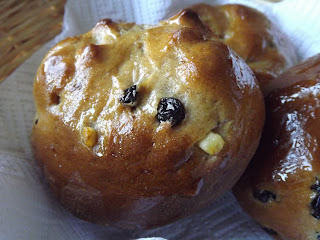 After cooling, Mike and I tried them while they were still slightly warm, spread with butter. They tasted fantastic, no one spice ovepowering the general taste, and miles better than supermarket pap. They were slightly firm on the outside, to give a hint of chewiness, but with a lovely soft centre. Another MB winner. They would be equally delicious split and toasted. 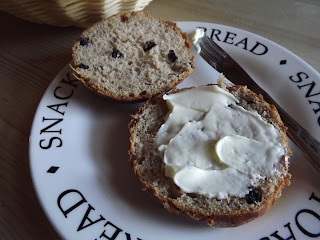