I'm really pleased to have discovered the Weekly Bake Off, (thanks to the morethanoccasionalbaker), and which is organised by Amy from the Great British Baking Club.

It's based on the challenge of baking every one of the 100 recipes in 'Mary Berry's 100 Cakes and Bakes'. I think it's a great way of expanding your repetoire and trying something new! This week, the bake off recipe is the Maple Syrup Cake, and I decided to have a go. Sadly, there will be no star baker badge for me this week. If there was a badge for funniest bake though ...

I'll be upfront about this. It has been a disaster. It was going well up until putting the cake in the oven. The batter tasted really nice (yes, spoon licking does take place in this household). The cake looked lovely and level in the pan, so into the oven it went. 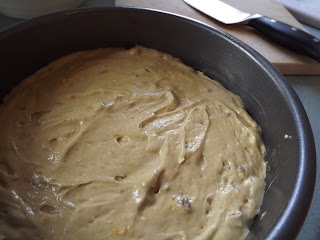 The recipe says to bake for 1 - 1 1/2 hours. That was where my first niggling thought occurred 'That's a pretty wide parameter!'. Having been caught in the past overbaking cakes, I decided I would check after one hour, so the timer was set. As soon as I opened the oven door I could see a dent in the middle. I closed the oven door but the damage was done. Despite trying to salvage the situation and baking for 15 minutes longer, the dent was fast becoming a hole in the middle of the cake. 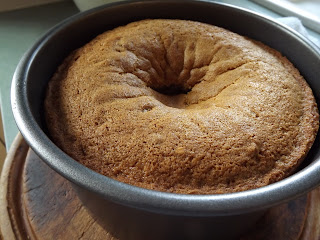 'That's not good' I thought, closely followed by 'I wonder what it'll taste like' (fantastic actually). I waited for the cake to cool down and then cut into the three layers stipulated in the recipe. This shows the extent of the problem. 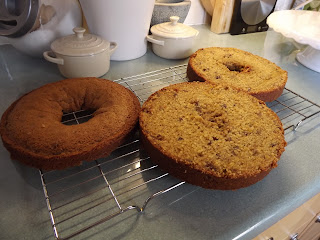 The top two layers resemble polos, and while the botom layer has remained intact, it's only because it is glued together by underdone cake. The outside is crispy and seems a little overdone. One thing is clear, this is not a dainty cake.

I've been wracking my brains to think what's gone wrong. Including:

In short I have no idea what went wrong. I wasn't sure whether to go ahead and ice it or not, but it is true that icing covers a multitude of sins (I also managed to overwhip the cream so that it firmed up a bit and filled the hole!).

Anyway, in case you are interested, here is the recipe.

For the filling and topping: 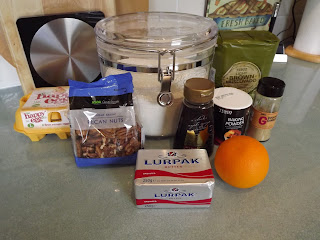 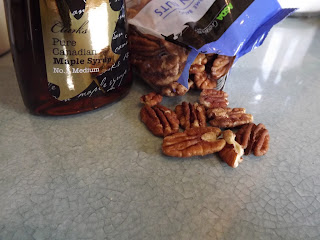 For the cake, you basically measure everything except the pecans into a bowl and mix well. Then fold in the chopped nuts. 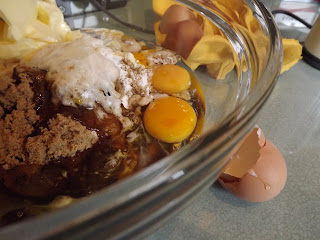 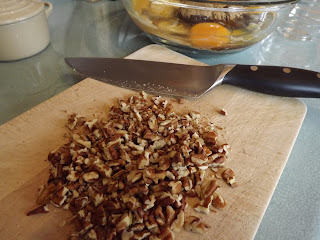 Add the mixture to a greased and base lined 20cm deep cake tin. Bake for 1 - 1 1/2 hours or until well risen, golden and springy to the touch.

Allow to cool slightly, then turn out on rack to completely cool. Cut into three layers.

Whip the cream until it just holds its shape and then fold in the maple syrup. Fill and cover the cake over the top and sides. Use the orange zest strips to decorate. 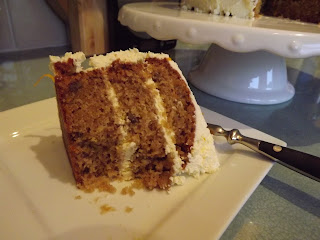 It's a shame this didn't turn out so well, but it still tasted really good. At least my little helper thought it/my reaction was funny ... 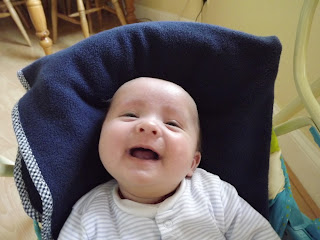 I'm looking forward to seeing how the other bakers got on on this one. Ah well, roll on next week!