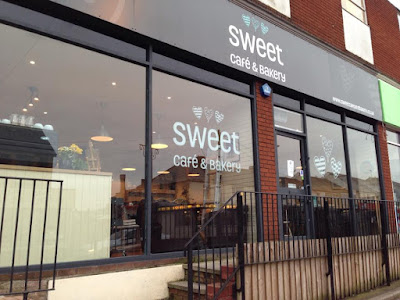 Oh my goodness! Where has time gone?

I'm so sorry - I'm clearly guilty of neglecting this blog, mainly due to being incredibly tired and/or busy. 12 months' of sleep deprivation got in the way.

Anyway, as a few of you were kind enough to enquire how things are going (waving to you Gem and Denise), I thought I'd post an update on our foray into small business.

Firstly, the purchase of the shop took much longer than we'd anticipated. It's really not that clear to us why, other than solicitors and surveyors etc seem to operate in an entirely different time zone of their own. Sometimes gobsmackingly so. To give an example, our solicitor had the nerve to say to us in early December: "Oh well, as we won't complete before Christmas now, I suppose there's no rush ...".

No, it's only that this deal has been dragging on for six months now, and Mike and I need to get on, get with it and hopefully start earning a living. Tsk.

We finally took ownership on 21 January 2015. God, there was a lot of work to do. We were having a bit of a re-fit, and our builders weren't able to start for a few weeks.

And then the typical builders' estimate of six days, inevitably became three and a half weeks and several thousand pounds more.

Finally, we had the place to ourselves.

Then the fun really started as we had decided to decorate the place ourselves. The first hurdle was deciding what colours could possibly mask the horrible orangey-brown combination we'd inherited. The next was teaching Josh and Ben one end of a paintbrush from the other. 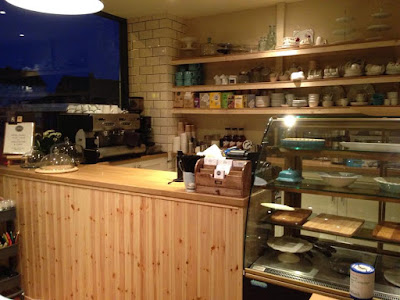 Then gradually, what had been (in my view) an orange and brown hell hole of a coffee shop, started to look brighter, as cream, dark grey and teal began to make an impression. 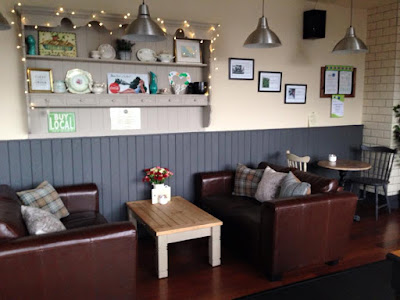 The delay at least meant that we were also able to kick on with our recruitment. We received over 70 applications, and eventually whittled them down to four. Four really great people.

Our team was in place and we had our first get-together in the coffee shop on 25 February. 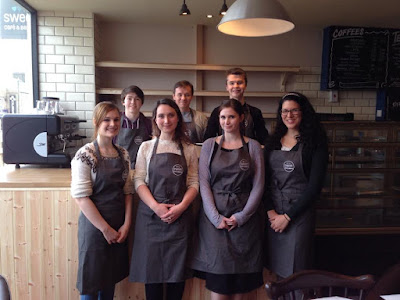 We opened on 3 March - just for a few hours - and then opened full time on 8 March. (That seems so long ago now!).

Within a few weeks, we'd had our anxiously awaited food hygiene inspection. 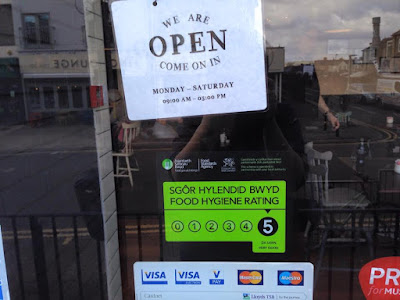 We achieved a '5' which we were really pleased with.

We've had to learn lots, and there have been a few mistakes along the way. We are sooo tired, with having just a couple of days off since we opened. Mike bears the brunt of this, as when Sam is not in nursery on a Saturday, he has been in the coffee shop while I toddler-sit.

And Sundays more often than not are spent either on trips to the wholesaler, or carrying out some maintenance/primping to the shop. Or both.

And there is usually baking that needs to be done so that we have a decent selection of cake available.

Or accounts, or some other form of paperwork.

I could go on, but I guess you're starting to get the picture.

The tiredness makes us tetchy. It's not been great for my stress and depression, and there have been times when I thought we were going to snap.

But there are great moments that are carrying us through.

The previous owners had clearly lost interest in the shop by the time they sold it. It was unloved and with a dodgy reputation. We have had to work hard to turn this around, and try to get across that we are an entirely different business. It's a real pick me up to overhear a new-to-us customer commenting that the place is 'so different now' and 'lovely'.

It's been amazing watching Mike and the boys develop their barista skills. And the relationship with the customers, some of whom were a little, ahem, surly at first,  and win them over. We've got a real cohort of regulars now, and we've worked hard to build a sense of community.

We've done some fundraising for local charities, and held a bake-off as part of the Whitchurch Festival. Good times.

As a keen - yet anxious - baker, it's been an ego boost to get  some fabulous feedback. People actually like my cake! People who've actually tasted it!  And they come back. Whoop! 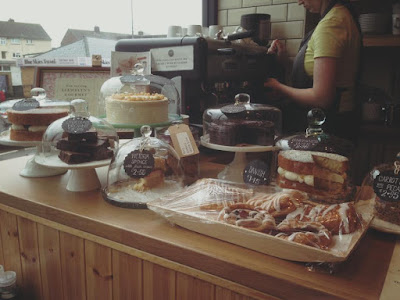 We've had our first engagement on the back of some of our Red Velvet Cupcakes. We've seen babies  whose first birthday has been celebrated with one of our cakes turn into toddlers. We've had our first Christmas, with lots and lots of twinkling fairy lights, hot chocolate and mince pies.

There's so much more we want to do, but we've needed to take time to learn the business. It's been so much harder than we anticipated, but we're still here, nearly twelve months later.

Hopefully, I won't leave my next post so long. 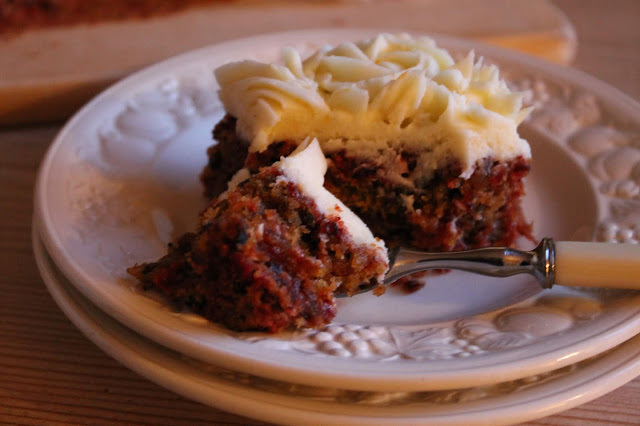