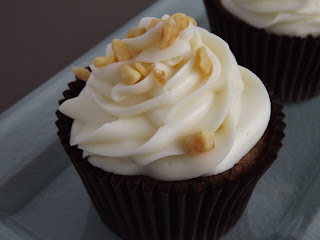 With Halloween just gone, it seems that we are well and truly into the changing of the seasons. Although I didn't get my act together enough to post this in time for yesterday, given its pumpkin theme, I thought you might like to see my interpretation of a great autumn recipe from Ina Garten's new book, Foolproof. 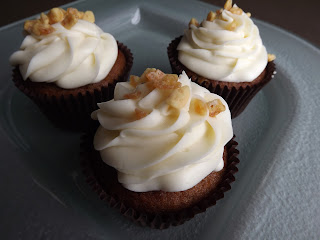 I love Barefoot Contessa. I'm sure I've told you that before. Discovering the programme was a complete revelation to me. This was shortly after we got cable tv, around 1998, and I actually discovered that there was a whole network devoted to food and cookery programmes. I was in my element. Unfortunately work used to get in the way a bit, so I used to place a 4 hour tape in the video and set it record. Then, when I got in from work, I'd be able to watch everything. Over time, Barefoot Contessa was one of the programmes I especially looked forward to. 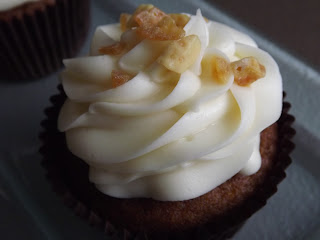 So anyway, when Ina comes out with a new book it is always on my must buy list. Her recipes use American cup measures, which can take some working out into metric (or imperial), but I've always found them consistently reliable. Her coconut cupcakes are one of my all time favourites. When I was looking for some pumpkin recipes for autumn, I came across her recipe for these cupcakes. You can find it on line here, and in 'Foolproof'. 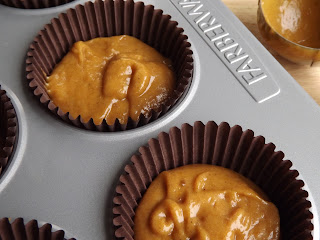 Making the cupcakes is quite simple - a case of mixing the pumpkin, eggs, sugars and vegetable oil then, separately, mixing all the dry ingredients together, then combining the two. It's a bit more like muffin methodology than cupcakes. 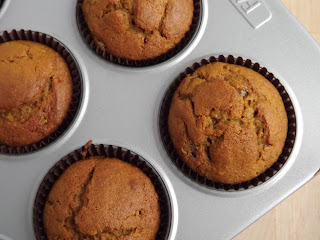 After baking in the oven, you decorate with a subtly maple flavoured cream cheese frosting. Ina just slathers hers on, but I decided to pipe swirls, using a Wilton 2D tip. The original recipe then uses chopped Heathbars as a decoration - as these are a US candy bar, I didn't have any to hand. But I found that a packet of honeycomb sprinkles from Sainsbury's did the trick. 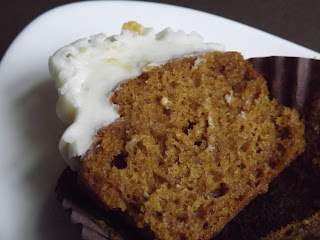 I loved the taste of these. The finished cupcakes were really moist and although I couldn't overtly taste pumpkin, the overall flavour was one of a lovely, soft gingerbread. As you can get the recipe on line, I'm just going to list the ingredients and a few pointers as to how I adapted it slightly.
Pumpkin Cupcakes with Maple Frosting
Ingredients (makes 12)
150g plain flour
1 tspn baking powder
1/2 tspn bicarbonate of soda
1/2 tspn salt
1 tspn ground cinnamon
1/2 tspn ground ginger
1/2 tspn ground nutmeg
2 eggs (between 64 and 71g weighed in the shell)
225g canned pumpkin (not pie filling but packed pumpkin)
112g golden brown caster sugar
100g light brown soft sugar
118ml sunflower oil
For the frosting
125g cream cheese at room temperature - use full fat rather than light
25g unsalted butter softened
2 tbspn maple syrup
250g icing sugar 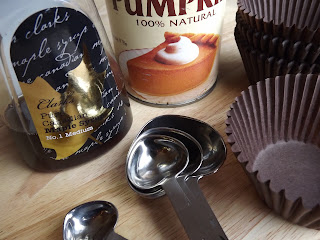 I managed to get 12 cupcakes out of the mix using a 2 1/2 inch ice cream scoop to portion out the batter (Ina's recipe says it makes 10).

The recipe calls for US size XL eggs - I've given the weights above - this is more like our large size. I normally weigh mine and go for a weight somewhere in the middle (for example 68g), or one near 64g and one near 71 to balance out.

I didn't have maple extract as per the original recipe, so just used maple syrup.

I used canned pumpkin, which the recipe calls for. You could probably use mashed pumpkin you'd prepared yourself - but I think you would need to make sure the mash was quite dry, as that's the texture of canned. Otherwise the batter would just be too runny and the cakes would not work. 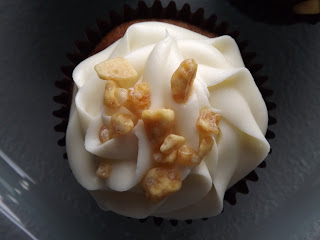 Hope you all had a fantastic Halloween!