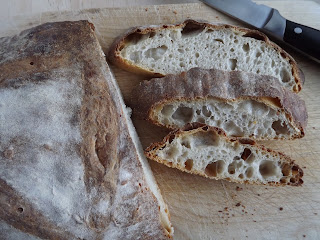 Back in February, one of Mike's colleagues heard about my baking blog. She kindly offered me some of her sourdough starter, called Sophia, whose origins lay in Chicago some 8 years ago. I didn't know much about sourdough at that point, but what I had was all good, and from that knew that an 8 year old starter was not something you'd come across all that often, so I jumped at the chance. A few days later a plastic tub was nesting  in the fridge with a strange, gloopy substance inside. I'd been given some instructions on how to feed her, and referred to The Fresh Loaf - a website devoted to all things bread related, and which includes a brilliant community forum.

The first time I fed Sophia, I transferred about half of her to a clean kilner jar, added the refresher of flour and water, and stirred. I couldn't bear to just bin the other half, so began a second jar (now known as Olivia). I began to read up on how to actually transform the alchemy taking place in the jar, to an edible loaf. It seemed like a fairly long process, and as timing was poor, the months dragged on and on. I must admit, Sophia and Olivia became a bit neglected. I'd started off religiously feeding them every week (this time fighting the reluctance to chuck the discarded starter, otherwise Mike would have opened the fridge to row after row of kilner jars!). But the week started to creep up to fortnightly, then I'd go to feed them and suddenly realise that they had been left for anything up to a month. I'd repent and decide immediately that I must try baking with them. Then they'd show me just how they felt about my neglect (the photo below shows the mess I found after refreshing them and then leaving them to ferment for a few hours). Either that or I just needed bigger jars ... :) 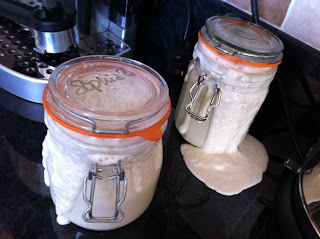 Any way, a few months back, pushed for the time most recipes for sourdough seemed to need, I tried to cheat. Looking for a 'easy sourdough recipe' on Google, led me to this one by Emeril Lagasse on Food Network (note the advice at the end of the starter recipe!). I used the bread recipe, substituting my starter for the one in Emeril's recipe. The recipe doesn't add any extra water, and so the bread turned out a bit clumpy and dense (photo below - excuse the quality but this was late at night). Not what I had hoped for but then I suppose I should have known better. 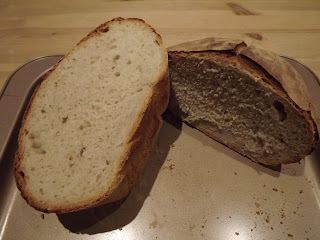 Roll forward a few months, and another recipe caught my eye. This time in a magazine, Making Cakes and Bakes (issue 3). Well. Put it this way, I didn't even bother taking a picture of that one. I'm sure it was me, rather than the recipe, but my ball of dough didn't stay a ball. It ended up as a pretty flat pancake. I've even tried a recipe for the bread machine - that turned out a flavourful but pretty dense loaf, too, as I guess the 4 hour programme wasn't really designed for sourdough. Hmmm. Clearly, I was a bit slow in catching on to the fact that sourdough, made as it should be, is a slow process.


So, knowing that Mike and I had a couple of weeks off work, I decided that I would give sourdough a proper go. I turned to Dan Lepard's Short and Sweet for guidance. Dan's recipe is pretty straightforward, but what I found really helpful, was the guidance he gives on bread making in general, and the 'no knead' method he uses.  So, as I knew we were having a day around the house yesterday, I decided to give it a go.  I made my 'shaggy ball of dough' and left it to sit for 10-15 minutes, and then gave it a brief gentle knead along the lines Dan suggests. I repeated this twice more, at 10 minute intervals. I was amazed by how much easier this made the dough to handle. Eventually, I had a round ball of fairly smooth looking dough, which I left to rise.

I was amazed and really pleased when an impromptu Tweet, announcing what I was up to, garnered a response from Dan, with some timely advice: 'As soon as you spy bubbles in the dough, shape it, then when it's risen by half (not double) bake it'. So after about three and a half hours of sitting on my counter top, the dough looked like this:

At this point I turned the loaf out to shape it, and then placed it on an oiled baking tray. I think this meant that it spread a little too much, rather than maintained a nice ball shape [next time, I might try the final prove in a bowl lined with a floured tea-towel - gently tipping it out just before baking].

Anyway, after about another hour and a half, it looked like it had expanded the required amount for baking, even though it looked a little flatter than I wanted. I'd preheated my oven as high as it would go on its bread setting (220 C), so put the bread straight in. I had forgotten to either spray the top of the loaf with water (as Dan suggests) or place a tray of water in the bottom of the oven.

I was amazed though, at how much the bread rose within the first ten minutes of being in the oven - nearly double its height. This also showed, I think, that my slashes in the top weren't deep enough, as they hardly showed once baked. I had set the timer for 45 minutes, but the loaf was browning very quickly, so after 20 minutes I turned the oven down to 195 C and added a tray of water to the bottom of the oven. After the 45 minutes, the loaf had developed what I could feel was a strong, thick crust. In order to soften it slightly, I placed a clean tea towel over the loaf while it cooled. 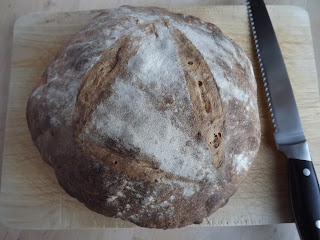 I left it to cool in total about an hour, and then unable to wait anymore, cut into it. It showed (as below) the big bubbles in the dough - although the centre of the loaf definitely had smaller bubbles. It tasted gorgeously sourdoughy though, and Mike and I polished off half the loaf before we'd even realised it. 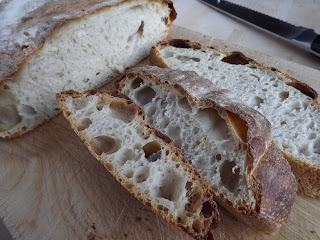 I'm really pleased with how this attempt went. Much better than anything so far. I will definitely give this another go as soon as I can. The starter was fed the evening before, then left on the counter for a few hours until bubbling away. I refrigerated it overnight, and it dropped slightly, so the next morning, I took it out and left it at room temperature for about four hours until it was bubbling away again. The dough took about 45 minutes to prepare, three and a half hours on the first rise, and then an hour and a half proving. With baking and cooling adding a further hour and three quarters, the entire process took about seven and a half hours, although much of this was not time actively spent on it. The end result though was bloody gorgeous and definitely well worth it. I've also learnt some things are better not rushed.
So thank you Mr Lepard. You might just have made a sourdough baker of me yet.
Susie
Labels: bread sourdough