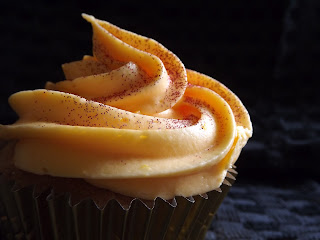 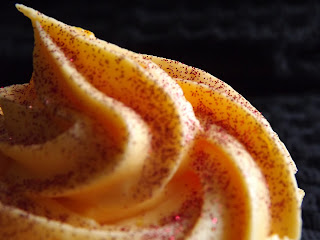 I've always loved the romanticism of the Olympics, and especially the flame. Who can forget the opening ceremony of the Barcelona Olympics, when an archer fired a flaming arrow over the cauldron, which then ignited? So, when Laura of Laura Loves Cakes and Rachel of Dolly Bakes announced that this month's Calendar Cakes challenge (hosted by Laura) was based on the Olympics, I didn't have to think too long about what I wanted to do. 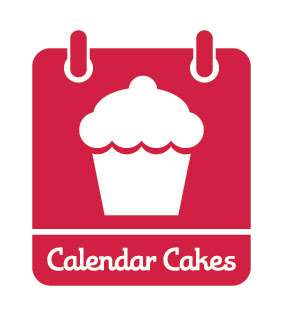 Inspired by the orange of the flame, I decided to do an orange flavoured and coloured frosting, with a chocolate chip and orange cupcake. I used gold cupcake cases as well, which is the colour of the 2012 Olympic Relay Torch. I tried three different ways of decorating the cupcakes. First was swirling the orange frosting with a deeper shade of orange. This turned out OK, but only on the first cupcake as by the time I piped the second all the orange colouring (which I smeared inside the piping nozzle) had disappeared. Second was using some red, orange, yellow and white coloured sprinkles. This looked cute, but no more so than any other cupcake. I then tried some red glitter dusted over. It didn't really give the effect I was after, but looked pretty anyway! 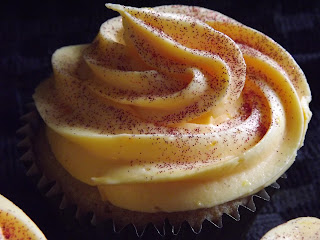 The cupcakes themselves are flavoured with orange extract, and with a hefty dose of chocolate chips. The frosting is actually made using icing sugar with half butter and half cream cheese, flavoured with orange zest and juice. I love using cream cheese in frosting, as I find the slight tartness helps stop it becoming too sweet. It seems to give a good consistency too and holds up well to piping.

The resulting cupcake was really moist sponge, subtly flavoured with orange and studded with chocolate. The frosting was quite zingy - from the  zest - and I felt it really complemented the sponge. My piping did spark a debate in the house though as to whether there was a little too much frosting to cake (personally, I had no idea what they were talking about ;) ). Anyway, here's what I did. 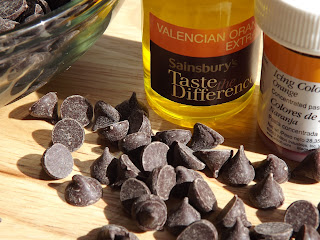 In a stand mixer, cream the butter and sugar together until light and fluffy. Add the eggs one at a time and mix to combine. Add the milk and orange extract. Then, add the flour and gently mix until incorporated. Fold in the chocolate chips until mixed evenly throughout. 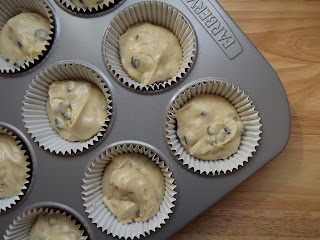 Scoop the mixture into the baking tray, filling the cases no more than two thirds full. Bake in the centre of the oven for about 20 minutes, until risen and golden and a skewer comes out clean.

Remove and allow to cool in the tray for a few minutes before turning out onto a wire rack to cool completely. 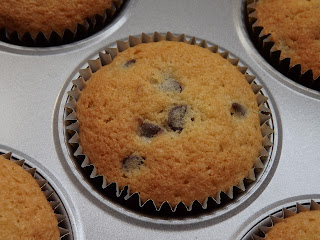 To make the frosting, in a stand mixer using the paddle attachment, beat the butter and cream cheese until smooth. Add the zest and orange juice and mix to combine. Add the icing sugar, and starting the mixer slowly, mix until combined. Turn the mixer to high and beat for a few minutes until light and fluffy. You can spread this on the cupcakes when they are completely cold or, as I did, use a piping bag fitted with a Wilton 1M tip, to pipe swirls on. 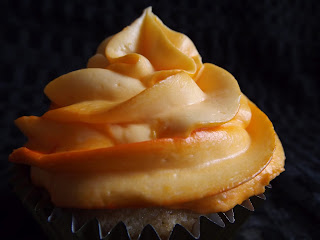 The picture above shows the one cake with the shaded frosting. I think if I want to do this again, rather than smear the inside of the nozzle with extra colouring, I'll try the two icing bag method (this involves placing each colour icing into its own bag, and then placing the bags inside a third fitted with a nozzle, then piping as normal).

Anyway, there's my first entry for Calendar Cakes. Hope you like them.

Have a great Games,